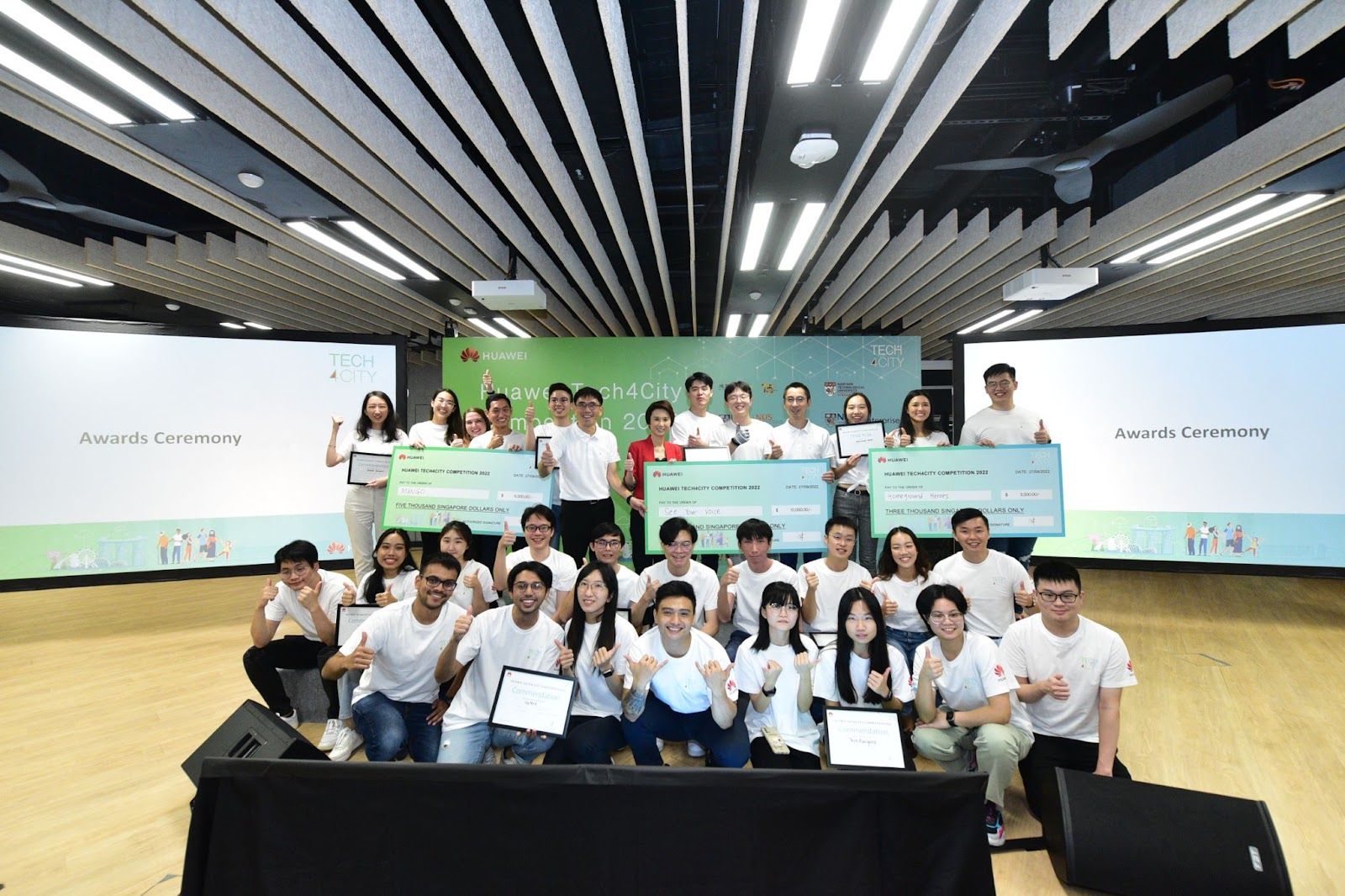 There are over 70 million Deaf people globally according to the World Federation of the Deaf. They face massive communication barriers with those who can hear but technology can enable greater inclusion.

A new smart glove that can be worn by the Deaf could soon help both groups to communicate with one another if it gets launched into the market. The wearable tech, which is driven by artificial intelligence that can translate sign language to speech and text and vice versa, was created by a group of National University of Singapore (NUS) postgraduate students for Huawei’s Tech4City Competition 2022.

The competition, which attracted 368 participants from local universities and polytechnics forming 141 teams, ran from 19 May and held its finals earlier this week. The solution is still in the development phase and works with a corresponding app paired via Bluetooth.

The NUS team, named “See Your Voice”, ended up impressing a group of esteemed judges with their innovative and inclusive solution, leading them to walk away with the S$10,000 (US$6,930) grand prize money. In addition to the prize money, the winning team has been fast-tracked into Huawei’s Seeds for the Future 2023 programme and is eligible for an internship with the global ICT provider.


See Your Voice aims to help the Deaf to achieve a better quality of life and plans to offer the solution at a monthly subscription fee of S$10 (US$6.93) once the smart glove is mass-produced. The wearable tech has been used in international events such as the Microsoft Inclusion Conference and Paralympic Games, according to Gong in his pitch to judges at the competition’s finals held earlier this week.

“We want to build an inclusive and equal society with AI-driven accessible solutions,” said He Gong, team lead for See Your Voice.

He told GovInsider that See Your Voice already launched a smartphone application that can translate sign language to speech on the Huawei App Gallery prior to joining Huawei’s Tech4City competition. But the team decided to temporarily remove the app and make further improvements to it.

Using self-developed algorithms, they have trained the glove to detect the hand movements of 8,000 words in various sign languages including Chinese, American and Singapore versions, as instructed by the user.

They decided to join the Tech4City competition to utilise Huawei’s database such as the company’s Pangu Model and resources as well as access more collaboration opportunities. The Pangu Model includes the world’s largest Chinese natural language processing model, a kind of AI that helps computers process and analyse the way that humans write and speak.

The company introduced See Your Voice to mentors who helped them to improve their solution and gave suggestions on pitching for the competition. Following their victory at the competition, the team is now looking to reach out to local Deaf communities in Singapore and understand their needs better.


The other eight teams at the competition finals pitched technology solutions addressing pressing social issues such as poor waste management, food insecurity and dementia. The finalists were chosen based on the depth of research, innovativeness, social value, use of technology and feasibility.

Teams working on the nature theme found ways to harness technology to contribute to a greener future for Singapore. These included a smart floating farm as well as an AI solution to detect and remove contamination from recyclables.

Finally, the neighbour theme required teams to leverage technology to connect different groups of people and make life more convenient and inclusive. These teams took Singapore’s ageing population into account and came up with solutions to help them be independent and more involved in the community.

The Tech4City competition is part of Huawei’s TECH4ALL initiative – a long-term, digital inclusion programme that uses technology, applications, and skills to empower people and organisations.

In the months leading up to the Tech4City finals, Huawei held specially designed community events across the three themes. These events were attended by invited guests from partner universities namely NUS, NTU, SMU, SUTD as well as industry associates and non-profit organisations such as Business China.

The three community events were major channels for Huawei to reach out to youths in Singapore and also provided Tech4City participants the chance to network with industry professionals.Many young budding tech entrepreneurs speaking at the series of Tech4City community events were lauded by Tin Pei Ling, CEO of Business China, and Member of Parliament, at the Tech4City competition finals.

“We hope to discover and nurture more of such talented youths who can grow to become a positive force for development when provided with knowledge and opportunities,” she said.

Such talent cultivation is intrinsically tied to close collaboration between sectors such as institutes of higher learning, government agencies, corporations, and communities according to Tin.

She said the competition provided an excellent platform for youths to brainstorm and develop ideas to tackle salient and urgent issues such as reducing carbon emissions, building Singapore’s social and cultural capital as well as creating a resilient and inclusive city.

“It raises our youth’s awareness of how digitalisation and sustainability can be positive forces in solving today’s challenges and bringing our world forward,” she added. Low was the guest of honour at the finals.

With the finals, Huawei has seen many fresh ideas for building a liveable city where we are proud to live according to Foo Fang Yong, Chief Executive Officer, Huawei International.

Technology serves as a form of empowerment to help us create a sustainable and inclusive community, where talent is the key to making this happen, he said.

The global ICT provider is also looking for ways to engage the community better. One such example is through ideation competitions like Tech4City where Huawei can harness ideas from youths for practical implementation, said Jun Zhang, Vice President, Huawei Asia Pacific.

“We believe that young people have and will continue to play an important role in the region’s, and the world’s economic development,” he said.

To that end, Huawei is committed to investing US$50 million and cultivating 500,000 talents through multiple programmes including Seeds for the Future, ASEAN Academy, and ICT Academy by 2026 as part of its five-year talent plan starting from 2021.