How climate change will reshape Singapore in 200 years 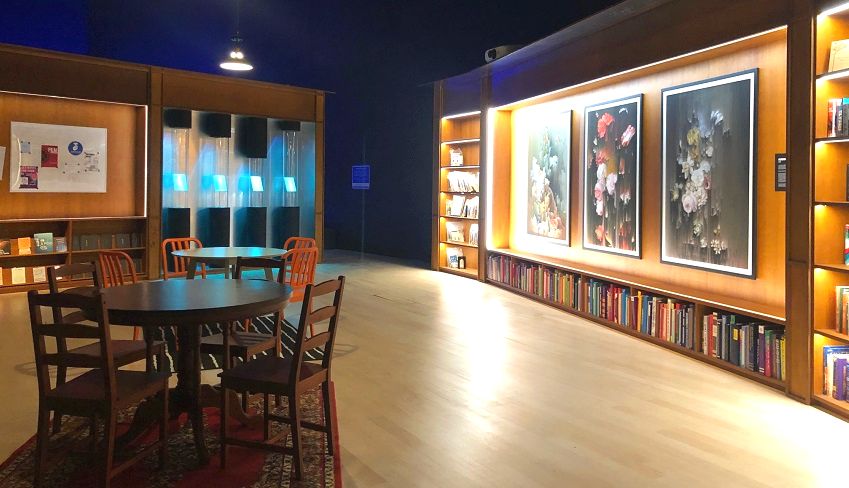 Jellyfish are more likely to survive climate change than humans are. Centuries from now, if all the ice caps have melted and most of Earth is covered in water, these brainless, spineless sea animals will be the dominant species on the planet.

This is one of the scenarios imagined by the ArtScience Museum’s 2219: Futures Imagined exhibition. The interactive, immersive experience pushes audiences to consider a future so unlike the one we know today, after it has weathered the impacts of climate change.

2219 takes visitors through the next 200 years of Singapore, examining how climate change could impact the island-state. GovInsider spoke with Honor Harger, Executive Director of the ArtScience Museum, to find out how they engage visitors to think about their hopes, the future, and the sticky topic of climate change.


Stepping into the future


Policymakers work to predict, understand and change the future, but simulation rooms and predictive data models can only go so far. “Policymakers are very used to scenarios in Singapore, but they may not be used to actually physically stepping into them,” Harger notes. 2219 presents a new way for policymakers to encounter future scenarios, by “physically and emotionally inhabiting” them. “As we say, try them on for size,” Harger quips.

And the exhibits do paint a striking image. In a recreation of a HDB flat, a form of public housing close to many Singaporeans’ hearts, visitors look out of the window to see people rowing canoes in the waters below. “What might housing policy look like in 50 years, when rising sea levels are an issue?” asks Harger.

This exhibit probes visitors to reconsider other aspects of their lives as well. “If our streets are flooded, then our servers are probably going to be disrupted as well,” Harger says. In a world that relies so heavily on digital means to store information, what would this mean for the way we hand our knowledge on to future generations?

One exhibit, The Library of Necessary Books, invites visitors to donate books that they think will be important for future generations. It points to the “reemergence of books as a mechanism of passing knowledge from one generation to the next,” explains Harger.

“That's a challenge about the future that a lot of people don't really think about,” Harger says. “When people think about the future, they think artificial intelligence and robots. That’s incompatible with a reality that’s transformed by the type of climate change and biodiversity loss that we’re thinking about right now.”


Through the lens of climate change

The Prime Minister addressed climate change as “perhaps the biggest existential threat Singapore has faced” at the National Day Rally in 2019. “We felt that 2019 marked the arrival of consciousness of how big a problem climate change is going to be” for the country and the region, says Harger.

The exhibition deliberately included works from artists all over the world to bring in a global perspective, Harger shares. After all, climate change is “the very definition of a global issue.” But climate change is no easy topic to discuss. “One of the big challenges for organisations who work around topics of sustainability is keeping an audience with them,” notes Harger. “It can be so scary to think about these topics that people emotionally disengage or they become really anxious and worried.”

So, how can exhibitions get people thinking without using scare tactics? The Museum was careful to create a future that was realistic, but didn’t intentionally shock or traumatise the audience. “We put a lot of thought into showing that there may be opportunities, even if the future is negatively affected by climate change, to develop resilience,” says Harger.

Take, for instance, the HDB exhibit. Flippers replace sneakers on the shoe rack and pockets of vegetable gardens line the walls to provide an additional source of food. “Some unpleasant things have happened, but it’s very clear that these inhabitants of these future scenarios are getting by,” explains Harger.

The HDB flat is also familiar, even with the impact of climate change looming in the exhibition. The kitchen cabinets are covered with children’s drawings, and religious artefacts sit on the shelves. “It was quite important for us to keep these small moments within the exhibition that enabled our visitors to find themselves, and almost feel like this might be a future that they could be in,” says Harger.

The message, ultimately, is one of hope. “This is a happy home. This is probably not the future we want, but there is a way that we will adapt to this future,” Harger says.


Beyond an affirmation of our resilience, 2219 is a gentle nudge to action. “We want people to take away the sense that the future is not yet defined. Every single person who walks through that exhibition has agency,” says Harger.

Emotional connection is necessary to drive action, which is why the exhibits had to be realistic and connect with visitors emotionally. “Most conversations about the future are heralded from the rooftop. This is a much subtler, humbler story about the small futures that make up our daily lives, so they connect on quite a deep emotional level,” Harger notes. “That’s how you create capacity for change.”

The exhibition ends with a rather symbolic act - visitors write down their hope for the future on a slip of paper. These are rolled up and strung together to form a bead curtain at the exit. “Every visitor has to literally pass through the hopes and dreams of all of the other visitors in the form of the beads” into a sobering reality, says Harger.

Long after the bead curtains have fallen on this project, people will need that hope to adapt to the immense challenges ahead.