From investing in renewable energy to greening infrastructure and closing the waste loop, Singapore’s resort island has been on a journey to become a sustainable tourism destination. Can it also be a model for the country’s net zero goals? 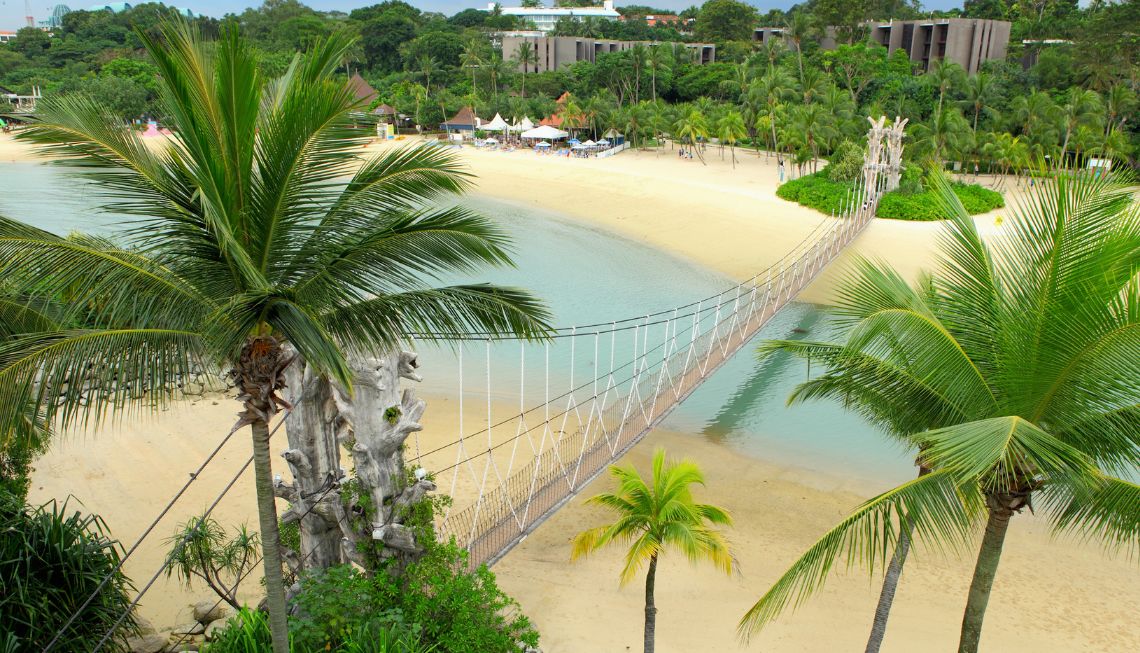 This week, Singapore’s Deputy Prime Minister Lawrence Wong reaffirmed that the country was on track to achieve its net zero emissions target by 2050 at the opening of Singapore International Energy Week. In his keynote address, he introduced key initiatives to meet this target, such as the country’s new strategy for green finance and the adoption of low-carbon hydrogen.

In particular, he highlighted that one of the key focus areas would be improving the built environment’s energy efficiency. He announced that all new developments in the planned Jurong Lake District, an upcoming business district located outside the city centre, will aim to achieve net zero emissions by 2045.

This would run parallel alongside existing efforts to transform other areas, such as resort island Sentosa, into more sustainable locations, he said. In August this year, Sentosa had been certified as a sustainable tourism destination by Vireo Srl, a certification body accredited by the Global Sustainable Tourism Council (GSTC), a non-profit organisation that establishes and manages criteria for sustainable destinations, hotels, and tour operators.

This certification was “an affirmation of SDC’s strong push for collective and collaborative whole-of-island efforts towards achieving a more sustainable Sentosa,” says Lee Cheh Hsien, Divisional Director of Planning at Sentosa Development Corporation, the statutory board that manages the island.

In 2021, SDC announced the Sustainable Sentosa strategy roadmap, which builds on the tourism destination’s past sustainability efforts to accelerate its journey to net zero by 2030. GovInsider speaks to Lee to learn more about how Sentosa aims to achieve its net zero goals ahead of the curve.

By 2030, 10 per cent of its electricity will be powered by onsite renewable energy, reported CNA. In June, SDC launched a tender for solar cells to be installed at 7 sites, and Resorts World Sentosa, an integrated resort on the island, has begun installing cells at 11 sites on its premises.

Lee told GovInsider that this effort will generate about 4 gigawatt hours of renewable energy annually, removing the equivalent of the carbon footprint of 60,000 hotel room nights’ stay.

The island has also completed its trial of electric buses, with an eventual goal of having 100 per cent of on-island transportation being fully electric by 2025, and the installation of electric vehicle charging ports by 2030, shared Lee.

He shared that they are continuing to explore novel ways of generating renewable energy and lowering their carbon footprint. For instance, they are exploring the use of tidal energy along the island’s coastlines.

Such opportunities could contribute to an overall onsite carbon emission reduction of approximately 30 per cent, he said. The agency is currently studying the feasibility of these projects.

SDC has also launched the Sentosa Carbon Neutral Network to coordinate knowledge sharing and technological partnerships towards the goal of carbon neutrality, he said. The network comprises 21 members across the island, which collectively account for more than 97 per cent of Sentosa Island’s total carbon footprint.

These businesses have rolled out their own sustainable initiatives. For instance, operator Mount Faber Leisure Group opened the island’s first carbon-neutral attraction last year, the SkyHelix Sentosa, reported The Straits Times. Meanwhile, Resorts World Singapore has partnered with the National University of Singapore to fund research into biodiversity conservation as well as decarbonisation and nature-based solutions.

One such volunteer-run tour brings guests on an intertidal walk through one of Singapore’s last remaining coastal cliffs, Tanjong Rimau, to discover marine wildlife. The island has also begun offering “low-carbon activities” at the nearby Southern Islands, such as cycling, kayaking, and glamping.

“The aim is to bring sustainability from back-of-house to front-of-mind, by bringing guests up close to our environment,” says Lee.

According to SDC’s 2020/2021 sustainability report, the agency identified and replanted endangered native floral species, such as the Light Red Meranti, in the island’s forests. It has also implemented measures to limit access to beaches when the critically endangered Hawksbill turtles visit its shores, according to the report.

Additionally, SDC highlighted in its sustainability roadmap that it is working with the NUS Centre for Nature-based Climate Solutions to research and protect blue carbon habits such as seagrasses and mangroves.

According to its sustainability roadmap, single-use plastics have already been eliminated at selected establishments in Sentosa, including Resorts World Sentosa, Mount Faber Leisure and Sentosa Golf Club.

“Where reduction and elimination of waste are not possible, we will introduce solutions and initiatives to repurpose or recycle the waste that has been generated,” says Lee. These include encouraging businesses to segregate their waste and introducing guidelines for reducing disposables.

Previously, SDC had signed a Memorandum of Understanding with Temasek, the country’s state investment company. The partners are studying sustainability solutions such as floating solar panels and waste-to-energy systems that can transform horticultural waste into synthetic gas, a low-emission fuel.

Food waste is another area SDC is looking into, with the Sentosa Golf Club having been test-bedding an on-site food waste digester. The digester generates non-potable water and compost while reducing food waste, according to Sentosa’s website.

In last year’s press release announcing the island’s sustainability roadmap, Ms Thien Kwee Eng, Chief Executive Officer of SDC, said, “Sentosa is a microcosm of Singapore, and provides a unique environment to trial and implement innovative solutions that can advance Singapore’s sustainability journey.” As the island continues to take decisive steps towards decarbonisation, protecting its natural heritage, and reducing waste, it may serve as a model for other sustainable developments in the city-state.

[01 November 2022] Editor’s Note: A previous version of this article stated that the GSTC had certified Sentosa as a sustainable tourism destination. The article has since been amended for accuracy.