Japan’s digital vision reaches far beyond eradicating analogue remnants of the past, but the fate of the Digital Ministry’s agenda may be out of its hands. 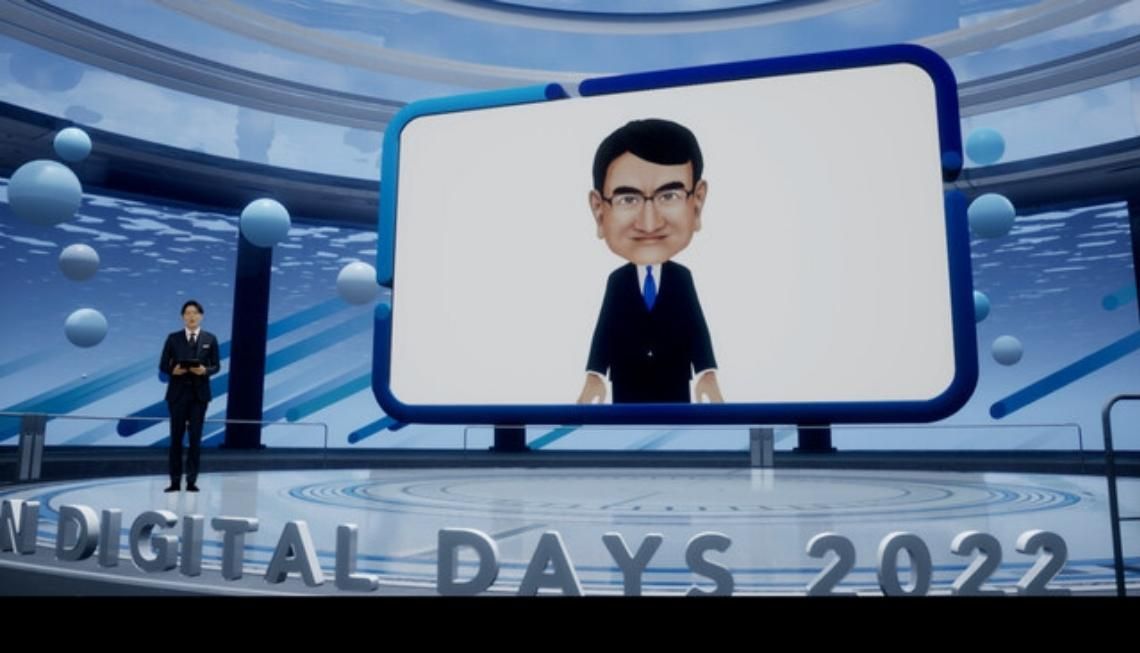 Since his appointment as Japanese Digital Minister in August 2022, much has been made of Kono Taro’s first tweet in the job, poking fun at Japan’s continued dependence on fax machines and floppy disks.

Indeed, the international media’s reporting on Japan’s digital agenda has often elided the digital ministry and its minister, focusing on Taro in labelling him a “maverick” and “outspoken” in his “war on a technology many haven’t seen for decades”.

It is easy to understand why Kono captures the popular imagination. A former foreign and defence minister under Abe Shinzo, Kono is as famous for his savvy use of Twitter as he is for overseeing Japan’s vaccine rollout and his attempts to eradicate the nation’s reliance on hanko seals – a carved stamp typically used by individuals in lieu of a signature.

Minister Kono was front and centre of Sunday’s event to mark Japan’s Digital Day, actually two days from 2nd to 3rd October, designed to showcase Japan’s digital journey so far. A digital avatar of Kono, head slightly larger than its real proportions and dressed in a customary blue suit and tie, opened the event.

But it was certainly not a one man show. Designated as “an opportunity for society as a whole to take a regular look back on, experience, and review digital issues”, these celebrations mark just over a year since the nation’s digital ministry was founded and touched on topics ranging from digital democracy to improved public services.

Despite having had three digital ministers in a year, there is clearly excitement about its mission and achievements. Its job offer acceptance rate stands above 90 per cent, and over the past year the ministry has seen employee satisfaction grow by 9 per cent and the percentage of people proud of the ministry improve by 8 per cent.

No doubt this is fuelled by a wide-ranging and ambitious agenda. In addition to promising to review thousands of pieces of legislation focused on outdated technologies, the ministry has focused its activities on providing citizen-centric public services; modernising digital infrastructure for inclusive growth; and strengthening digital resilience.


Central to this strategy has been Japan’s My Number card, an IC-chip embedded plastic identity card. Originally issued in January 2016 as part of an effort to streamline state welfare, tax, and other administration into one system, the digital ministry has begun to enable them to be used in online identity verification and as health insurance cards through the Mynaportal.

On this portal, users are today able to access health check-up information, link local tax deduction certificates to their final tax returns, and browse medicines. With the digital ministry having facilitated a law to allow “cashless” payments of various government administrative fees back in April, they plan to introduce online services ranging from passport applications to paying traffic fines and vehicle registration fees before the end of 2024.

Building digital infrastructure has also been a priority. As well as beginning to revise the 1,900 legal articles referring to floppy disks and CD-ROMs, the government has sought to modernise its outdated administrative systems. Until recently, each government ministry was responsible for its own digital system, causing inter-agency discrepancies in design, performance, and budget. A new government cloud system, successfully trialled and set to be standardised across the government, seeks to rectify this.

“What was once unimaginable is now becoming a reality. There is such a power in digital” – so goes the slogan for Japan’s Digital Day. Having put the foundations in place for a whole-of-government digitalisation, the digital ministry says, the next year will provide an explosion of digital services.

“We’ve done what we should while creating a big vision” was the verdict of Takashi Asanuma, the Chief Officer of Japan’s digital ministry, at an event to mark the first anniversary of its creation. Despite criticisms that this first year lacked any headline-grabbing achievement, given the task in front of the ministry, he ought to be taken at his word.

Out of the ministry’s hands


However, for all of Japan’s digital progress, the digital day slogan fails to address another reality: that the fate of its digital agenda may be beyond the ministry’s control.

Eradicating the floppy disk has become a symbol for wider plans to standardise and unify the digital design and output of Japan’s government agencies. In a recent attempt to streamline the government’s online presence and increase usability, bureaucrats have developed and tested a Content Management System and a set of design rules for government websites. It is now waiting to be implemented across the government.

The pattern is a familiar one. From adding additional capabilities to the My Number Cards and advancing cashless payments to rolling out Slack and Microsoft teams across government, the messaging on the digital ministry’s one-year report is broadly the same. Frameworks or products have been developed, and trials have succeeded locally, but they now face the challenge of being rolled out sequentially to different ministries. Despite attempts at co-creation and cross-departmental collaboration, this is easier said than done.

Minister Kono’s announcement in August was not the first time he had ‘declared war’ on analogue technologies. Back in 2021, as Minister for Administrative Reform, he also tried to eradicate fax machines, only to be met with more than 400 claims from government entities branding the move “impossible”.  A year later, and in a different ministerial position, this battle still rages.

The digital ministry’s infrastructure projects will require the good will of Japan’s other agencies to succeed; agencies that have so far shown anything but.

On the international stage


It is not just its own government ministries and local governments that will provide a test to Japan’s digital ambition, but its international partners too. On the international stage, bilateral meetings with digital ministers in the EU and US have been mirrored in Minister Kono’s presence at the G20 Digital Ministers’ Meeting in Indonesia last month. As a sign of the country’s ambition, the digital ministry will be hosting the G7 Digital Ministerial Meeting in 2023.

Crucial to the success of this meeting, and Japan’s global reputation for digital innovation, will be the success of the country’s attempts to promote ‘data free flow with trust’. The initiative, first raised at the G20 during Japan’s presidency in 2019, aims to enable cross-border free flow of data whilst addressing concerns over cybersecurity, data rights and privacy.

Back in April 2021, the G7 announced a roadmap for cooperating on DFFT. Looking ahead to 2023, Japan has again placed it front and centre of the Digital Minister’s meeting (and their broader digital strategy). Achieving progress will not be straightforward. Some G7 members have differing concepts of data security, and each must balance its own national or regional legal frameworks with the cosmopolitan ideal of DFFT.

Should further progress be made on DFFT in the 2023 meeting, Japan finds itself well placed to lead on streamlining cross-border data flows regionally. ASEAN, for example, might look towards the G7’s roadmap for inspiration on mapping domestic legal barriers and identifying best practices to reach regional consensus. Given the bloc’s proximity to Japan, it might look eastwards for guidance in doing so.

The responsibility for progress on DFFT next year is not Japan’s alone, but the meeting’s location means that an agreement would validate Kono Taro and his ministry internationally. Here, as with its domestic agenda, the digital ministry is depending on its partners for its success.

As Japan’s Digital Day gives way to October, branded the country’s “digital month”, more eyes will be on its digital ministry than ever before. Nobody should doubt its ambition, or deny its progress in its first year. But the road ahead is uncertain, and might just be strewn with jammed fax machines.