Autonomous robots will soon patrol in neighbourhoods, while drones are now helping to nab criminals. 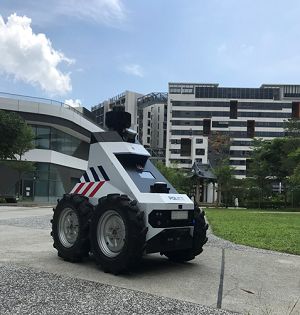 
The patrol robots, also known as the outdoor robotics surveillance system (ORSS), will complement the patrol work of real police officers, leaving more time for officers to work on other tasks. They “free up manpower to handle more critical tasks”, Loh remarked. The Ministry won an award for the Best Drones and Robotics Project at the GovInsider Innovation Awards this year.

The drones are equipped with high-definition cameras that transmit clear images of people and objects on the ground. Meanwhile, its thermal-imaging capabilities allow police to identify human heat signatures - a boon for nabbing criminals in densely-forested areas, especially at night.

The use of drones is still in its early stages, said Ng. “This is something new to MHA and requires buy-in from the ground officers.”
The success of these projects will crucially depend on ensuring that field officers and residents don't feel threatened by them. Perhaps a lesson from Wall-E could help.