Peeling back the curtain on Singapore's community response to terrorist threats

Edwin Tan, Director of the SGSecure Programme Office, introduces the SGSecure app and elaborates on how everyone can play a part in Singapore’s safety and security. 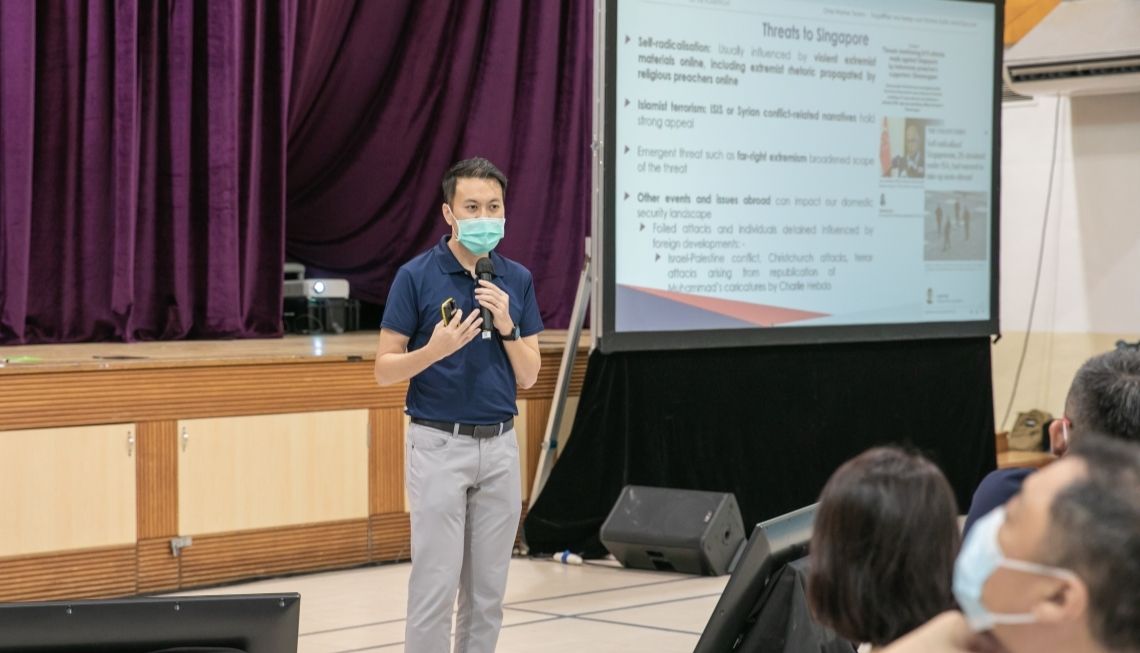 In December 2020, a 16-year-old self-radicalised Singaporean boy made headlines for planning to harm Muslims at two mosques with a machete. The news sent shockwaves across the nation. Once perceived as a faraway threat, terrorism had arrived on the shores of Singapore and its presence was palpable.

With terrorism being closer to home than we think, the Ministry of Home Affairs has proposed a whole-of-society approach to spearhead crisis preparedness efforts. The SGSecure app allows members of the public to report suspicious behaviour, receive information on security incidents, and respond to emergencies.

Edwin Tan, Director of the SGSecure Programme Office, highlights that the community’s response is critical in Singapore’s fight against terrorism and shares how the SGSecure app is helping the country to mount a strong defense.


The SGSecure app allows users to report suspicious sightings to authorities through the “Report” function. Providing an account is easy: users simply need to take a photo of the incident, give details of what they saw, and indicate the location of the sighting. The police will then follow up on all reports. Screenshot of the “Report” feature in the SGSecure app.

There are a few red flags that members of the public can look out for. These include individuals suspected to be armed with weapons, unattended bags or packages, and those showing signs of radicalisation or religious extremism. Example of an SGSecure Advisory Poster on how to spot suspicious items and behaviour.

Even in cases where one is unsure if the person or item is of security concern, “we would still encourage citizens to err on the side of caution and report them via the app,” Tan says.

“The key to averting crises lies in raising community vigilance. We want people to make a habit of reporting anything suspicious,” he adds. It appears that collective efforts are only growing stronger – the number of reports made through the app has increased from 6,000 in 2017 to 11,000 in 2021.

The threat of radicalisation


In Singapore, the terrorism threat stems primarily from self-radicalised individuals who are influenced by violent extremist material.

Global Islamist terrorist groups like the Islamic  State in Iraq and Syria (ISIS) and their supporters remain active in their recruitment and propaganda efforts online. At the same time, emergent threats such as far-right extremism can motivate at-risk individuals to violence.
Despite every effort made, the authorities may not be able to uncover every radicalised individual. This is where members of the public can fill in this gap and act quickly if they notice anyone exhibiting the following warning signs:

“Through early reporting, authorities can intervene as soon as possible, while the individual at risk can receive timely help, guidance, and counselling,” Tan affirms.

Misinformation can trigger unnecessary fear and erode trust in the community. “By only referring to news from official and reliable sources, we can curb the spread of rumours and help the public respond to threats in a calm and united manner,” Tan shares.

The alerts will feature links to official sources of information, such as press releases by the Ministry of Home Affairs, and redirect users to credible news reports by The Straits Times or CNA.

The app sends alerts of other emergencies, such as major fires, to advise individuals to avoid certain areas as well.

Involving the public to respond


But SGSecure is more than an app – it is by and large a national movement.

The SGSecure Responders’ Network is made up of community responders, many of whom are trained in emergency preparedness skills such as basic firefighting, first aid, cardiopulmonary resuscitation, and even psychological first aid. Anyone can join this network, Tan notes.

In the case of cardiac arrests or minor fire cases, these personnel are prepared to step forward and provide assistance prior to the arrival of emergency services. The “Respond” feature on the SGSecure app will notify them of incidents within 400 metres of their location.

“Time is of the essence when it comes to responding to medical emergencies and fire hazards. We hope to count on those nearest to the situation to render some aid before official help arrives,” Tan highlights.

Currently, there are more than 100,000 people in the SGSecure Responders’ Network. Participation has increased over the years, with the response rate for cardiac arrest and minor fire activations steadily rising from 30 per cent to 45 per cent between 2019 and 2021.

As the nature of potential crises and threats evolve, strengthening community preparedness will always be a work in progress. The SGSecure app empowers everyone to play their part in the fight against terrorism – from reporting suspicious activity and staying informed about threats, to providing timely help to the community during emergencies.