At the AWS Public Sector Summit 2022, public sector leaders from Singapore shared on the country’s cloud strategies, from the migration of less sensitive public sector systems to the commercial cloud, to developing a cloud-ready workforce. 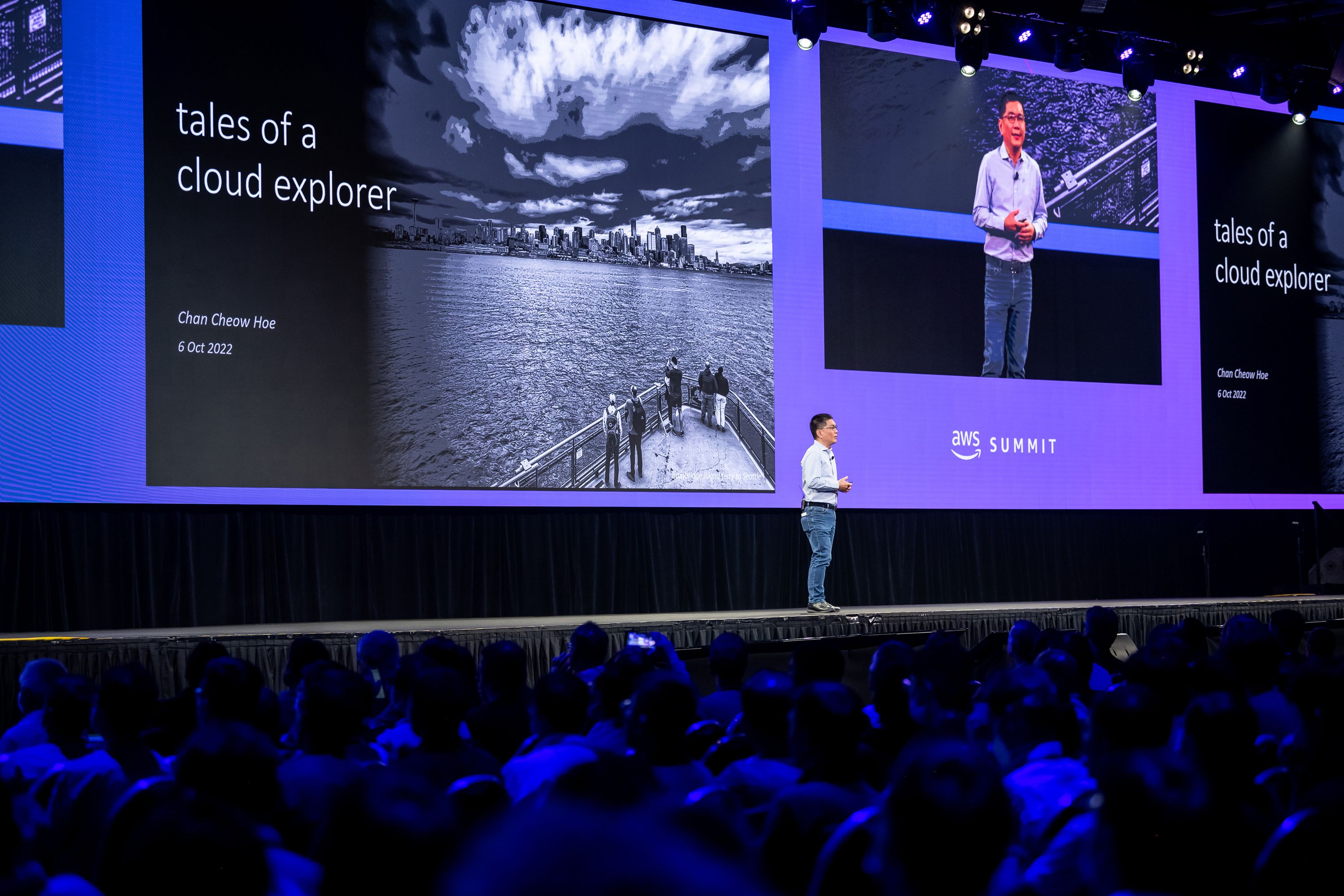 “Going to the cloud is almost like being a young person leaving home for the first time to go to university or abroad... It's full of excitement, freedom and everything. But at the same time, it's also full of risks,” said Chan Cheow Hoe, Government Chief Digital Technology Officer of Singapore’s Smart Nation and Digital Government Office. He was speaking at the AWS Public Sector Summit 2022, which was held on 6 October in Singapore.

At the summit’s keynote address, Chan spoke about Singapore’s cloud migration progress, and shared that the government has migrated close to 60 per cent of workloads to the commercial cloud, and is on track to achieving their target of 70 per cent by the third quarter of 2023.

The country had previously set a goal of shifting 70 per cent of less sensitive government systems and data onto the commercial cloud by 2023, such as corporate services for Finance and Human Resource, in an effort to modernise the government’s ICT systems. With the cloud migration, the country aimed to enable the use of cutting-edge cloud tools and reap the benefits of the commercial cloud, such as cheaper hosting and continuous improvements, according to the country’s digital blueprint.

During the keynote speech, Chan emphasised that the cloud is not necessarily riskier than on-premise systems, but it is critical to understand the risks associated with the cloud and explicitly deal with them. This is one reason that Singapore’s Government Technology Agency, or GovTech, prioritised building a strong cloud engineering team with deep capabilities to understand the risks and chances of failure, he explained.

He also highlighted the importance of going cloud native and adopting tools available on the cloud, rather than building new services from scratch. Though creating bespoke services may seem alluring, organisations must bear in mind that the cloud evolves at a breakneck speed, and maintaining bespoke services is challenging.

However, he added that as agencies adopt more services built on the cloud, the harder it becomes for them to move to a different cloud service provider and access different services in the future. So, it is important that agencies strike the right balance for themselves between going cloud-native while being able to move, he said.

Finally, he touched on the emergence of new cloud strategies, such as multi-clouds and sovereign clouds.

Multi-clouds may be more difficult to manage than marketing language suggests, according to Chan. He cautioned against ending up with a “Frankenstein” that’s difficult to manage. He also warned that relying too heavily on the sovereign cloud could negate the benefits of the cloud, such as having access to an ecosystem of services and options. The sovereign cloud can also be expensive, he added.


But as governments in ASEAN migrate to the cloud, they will need a workforce that is trained in cloud skills, within both the public and private sectors. A panel on ASEAN’s workforce delved into this topic, where speakers from the Singapore government shared about the opportunities and challenges facing the development of a cloud-skilled workforce.

Patrice Choong, Director of the School of Infocomm Technology at Ngee Ann Polytechnic, said that infocomm technology moves at a breakneck speed. As such, the education sector has to keep up in order to produce talent that have the relevant skills and are able to work in different industries that require ICT professionals. He explained that this is why the School of Infocomm Technology works closely with a panel of industry representatives to ensure that the curriculum remains updated.

Ian Choo, CEO, Singapore Code Campus, highlighted that though the Singapore-based coding school began as an education provider for students 7 - 18, the popularity of their coding programme for adult learners has actually surpassed the children’s programme a few years ago, and continues to grow.

They also discussed the value of industry certification. Chong Rong Hwa, Director of Advanced Cybersecurity Capabilities Division, Cybersecurity Group at GovTech, shared that though industry certification can endorse a candidate’s understanding of a subject matter, they need to be assessed holistically. Candidates also need to show they possess a mindset of continuous learning, he said.

In Singapore, AWS jointly developed a cloud technology skilling programme with the Singapore government curated for Singaporeans across different demographics, from new graduates and early career workers, to mid-career professionals.

Since 2017, the company has trained over 700,000 individuals in ASEAN with cloud skills, said Eric Conrad, Regional Managing Director, ASEAN, AWS, at the keynote address. It is also helping the Indonesian and Thai governments in training public sector employees with cloud skills.

The state of public sector cloud migration in ASEAN


At the keynote address, Conrad shared on how the hyperscale cloud provider is helping public sector agencies in the ASEAN region accelerate the adoption of cloud services and drive digital modernisation.

He shared that within this year, AWS signed a memorandum of understanding with Thailand’s Ministry of Digital Economy and Society to support the digital transformation of the Thailand Government Cloud. The memorandum will provide Thai government agencies access to more than 200 AWS solutions and services, according to a report by Channel Asia Tech.

In March, the company signed a Cloud Framework Agreement with the Malaysian Administrative Modernisation and Management Planning Unit (MAMPU) to accelerate cloud adoption and drive innovation in the public sector, he said. With the agreement, it will be easier for Malaysian government agencies to procure AWS solutions and services, reported Tech Wire Asia.

Following the agreement, AWS awarded its first contract with the Department of Polytechnic and Community College (DPCCE), a department within Malaysia’s Ministry of Higher Education, said Peter Moore, Regional Managing Director, Asia Pacific Japan, Worldwide Public Sector, AWS.  The department worked with AWS to migrate their Learning Management System to the cloud, supporting over 150,000 active users with access to its curriculum and digital learning activities.

Moore announced that Thailand’s Sukhothai Thammathirat’s Open University has chosen AWS as its strategic cloud provider in October 2022, as part of its vision of becoming a digital university. Having moved its entire IT infrastructure on the cloud in 2020, the university was able to transition to 100 per cent online learning during the Covid-19 pandemic, offering online services for its 200,000 users across 64 countries.

Conrad highlighted AWS’ new Smart City Competency program, which aims to develop a community of AWS partners that offer scalable smart city solutions on AWS to optimise city reforms. One such partner, Elitery, is supporting the government of West Java, Indonesia, with a traffic monitoring and analytics solution to alleviate traffic congestion.