Universities gear up towards cooperation on sustainability, public health and the future of education 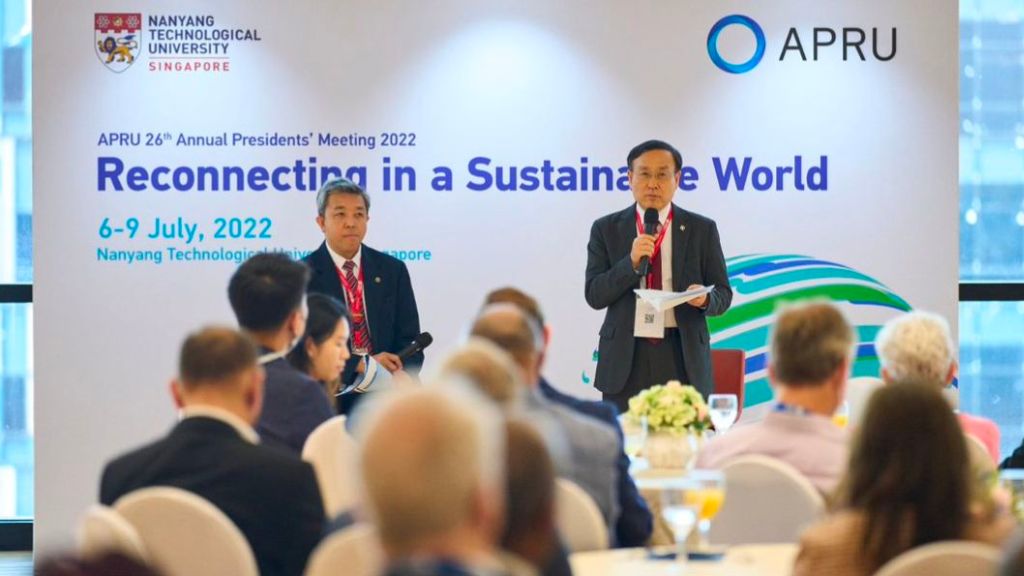 At the opening of 2022’s Association of Pacific Rim Annual Presidents’ Meeting, Subra Suresh of Nanyang Technological University, the conference’s host seat of learning, said universities were uniquely well-placed to tackle emerging crises. He explained that historically, universities took a longer view than businesses or governments, making them able to serve society with a perspective that other organisations may lack.

The APRU meeting serves as a key platform for universities to initiate or strengthen collaborations to continue the important work of bettering society. At the 2022 meeting, more than 100 presidents, senior university administrators, and private sector representatives gathered to discuss the future of action-oriented collaboration among universities.

Throughout a series of panel discussions, presidents, administrators and private sector leaders explored the education landscape’s evolution in response to Covid-19, emerging climate hazards, and new technologies, as they charted a path ahead for how higher education could continue to play an active role in these areas.

On 8 July, university presidents from Japan, South Korea, and the US gathered at the Sustainability and Climate Change panel to share the ways in which their universities were accelerating their climate change agenda.

President Carol Folt of the University of Southern California explained how the university had brought forward its deadline to go carbon-neutral from 2040 to 2025, and the investments it was making to meet the new goal. She also noted that students had increasingly said it was a priority key concern for them, manifested in such things as increased demand for sustainability courses and climate protests.

Other leaders explained the research initiatives they were undertaking to support moves towards decarbonisation.

Toshiyuki Kono, Executive Vice President of International Affairs at Japan’s Kyushu University, said that the university had been investing in carbon-capture technologies at its new Research Center for Negative Emissions Technologies, as well as in hydrogen energy research. The university also recently concluded a series of five webinars spotlighting the research initiatives APRU universities have embarked on, aiming to pave the way for a decarbonised society.

At Reconnecting: The New Urgency for Collaboration, panellists discussed how centres of higher education were cooperating on sustainability action plans to coordinate change on a global scale.

Deborah Terry, Vice-Chancellor and President of the University of Queensland in Australia, highlighted the recent launch of the university’s Global Development Impact Plan, which aimed to support developing countries in achieving sustainable development goals. Likewise, Professor Kathy Belov, Pro-Vice-Chancellor of Global Engagement at the University of Sydney, introduced the APRU Biodiversity Programme, which seeks to coordinate efforts to conserve Asia-Pacific’s biodiversity.


Beyond climate change, panellists across sessions also spoke about how Covid-19 had transformed education, and about the role of universities in managing future pandemics.

At a panel entitled Responses to Crisis in a Diverse Region, Kwang-Jae Kim, Provost and Executive Vice President of POSTECH in Pohang, South Korea, said the pandemic had spurred POSTECH to introduce elements of virtual reality and augmented reality in undergraduate classes. Freshman students in physics lab classes, for instance, were provided with VR devices to simulate experiments. POSTECH also sent experimental kits to students’ homes so they were able to conduct experiments with the guidance of VR directions.

At Preventing The Next Pandemic, Santa J. Ono, President and Vice-Chancellor at the University of British Columbia, explained how the APRU Presidential Working Group was supporting universities in preventing the next pandemic. The working group is compiling a handbook on pandemic crisis management and assembling scientific research assets related to biomedical technology as a major global resource.

Other speakers at the panel also spoke about the role of universities in leading public health strategies. Vice-Chancellor Dawn Freshwater of the University of Auckland spoke about APRU’s work on understanding the impact of the “infodemic”, or the misinformation that surrounded vaccines, during Covid-19.

Similarly, Professor Rocky S. Tuan, Vice-Chair of APRU and Vice-Chancellor and President of the Chinese University of Hong Kong, explained how nine APRU member universities were studying how social and cultural factors had affected the success of public health strategies. From the analysis, he suggested that it was critical for societies to develop trust in public institutions.

Knowledge-sharing across borders allows us to take a step back and appraise global crises from different perspectives, and to learn from each other’s successes and failures. The resumption of the in-person APRU Annual Presidents’ Meeting is a clear signal that universities are rising to meet the challenges of the contemporary moment, from taking stock of past challenges to taking the helm in confronting new obstacles.