What does it take to create a society where tech and humans live harmoniously?

Are technology and humanity fundamentally at odds? Dirk Dumortier, Head of Business Development Smart-City and Healthcare within APAC at Alcatel-Lucent Enterprise, explains why he thinks the two can live hand-in-hand, and the role of tech providers in ensuring it is so. 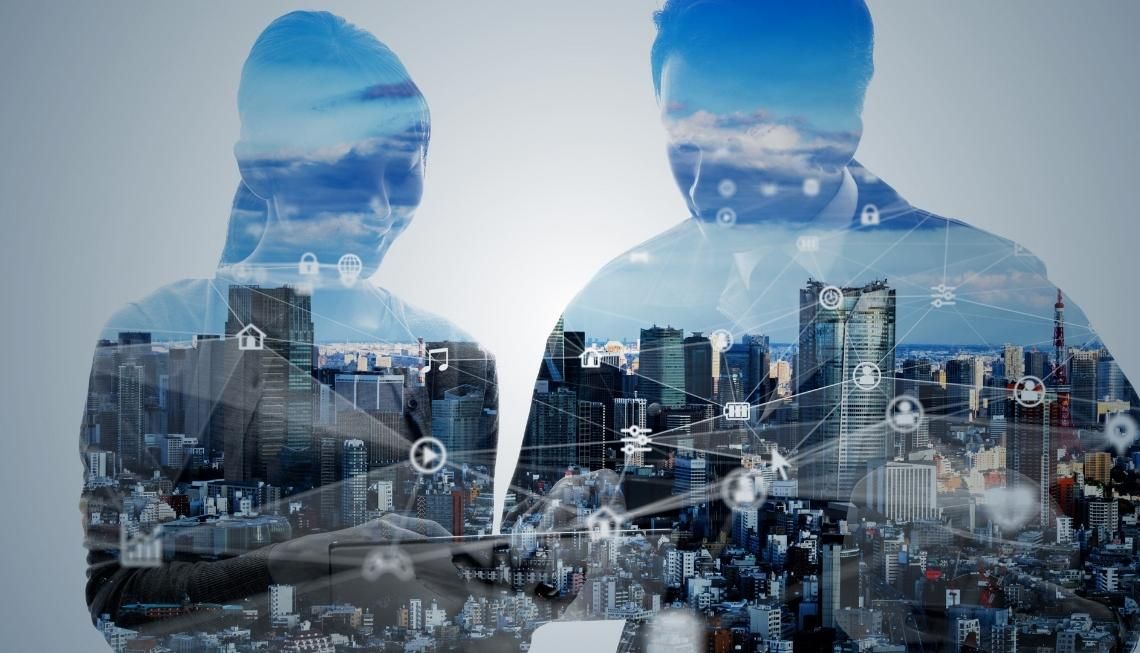 First introduced by Japan, Society 5.0 is defined as “a human-centered society that balances economic advancement with the resolution of social problems by a system that highly integrates cyberspace and physical space.” Image: Canva

Unparalleled convenience is one perk that technology has introduced into our daily lives. Getting a cab today is as easy as tapping a few buttons on your mobile phone, as are countless other services like food delivery or making a medical appointment.

But Dirk Dumortier, Head of Business Development Smart-City and Healthcare within APAC at telecommunications firm Alcatel-Lucent Enterprise, believes that this is indicative of an “over-digitalisation” of society.

“I think we are overdoing it, and missing more and more the link towards humanity,” he says. This was especially true during the Covid-19 pandemic. Across the world, workplaces and school became remote and physical distancing became the norm. While digital connectivity was necessary, it seemed that it was insufficient to counteract the diminished human connection as a result of shelter-in-place measures.

A study published by researchers from the Harvard Graduate School of Education found that youths struggled with feelings of social isolation amidst the pandemic. This is corroborated by a longitudinal meta-analysis study by the American Psychological Association, which observed a general increase in loneliness since the start of the pandemic.

“It’s time to bring people back together,” says Dumortier. And to do so, he believes that society needs to progress into Society 5.0 – placing a greater emphasis on a human-centred society and moving away from the IT-centred approach that has defined much of Society 4.0 today.

Society 5.0 is about bringing people and technology together, says Dumortier. “Not just technology for technology, but technology for helping humans,” he explains. And the first step, he believes, is to ensure that a human touch is present within the countless applications being used in daily life today.

Keeping the human presence in tech

“It’s that human touch that is missing,” Dumortier says. Once a mobile app is available and working, organisations tend to take their hands off it. Sometimes, if there is an issue with the application, users are then directed to contact a help staff via a different communication channel such as WhatsApp or e-mail.

Dumortier shares an example of his son being registered twice on a contact tracing application. Since there was no way to contact a help staff via the application, it took them a long time to figure out who they had to contact and how to solve the problem.

“It’s an additional step, and technology for technology’s sake,” Dumortier says. In contrast, Dumortier is proposing that organisations incorporate a method of communication within existing applications to retain the human touch.

“It makes life much simpler when you have, from time to time, that human touch at the other end that can help you along,” he says.

As a telecommunications provider, ALE has the building blocks to help governments achieve this. ALE’s Rainbow solution is a communication platform that can be integrated within existing applications and customised to suit an organisation’s needs, Dumortier explains. This helps organisations put a human face behind the technology, he adds.

In Indonesia, Rainbow is helping banks retain a human touch by allowing users to contact a human operator with a simple click of a button on the mobile banking application.

Besides banking, the Rainbow platform can also be used in education. When the pandemic forced many schools around the world to close their doors, remote schooling became the norm. But typical communication platforms were not created for education, and teachers often had to juggle between different platforms to teach, assign homework, or disseminate learning materials.

On the contrary, Rainbow can be integrated within existing learning management systems. Since the platform is customisable, schools can also use it for back office purposes like attendance taking, as Rainbow can automatically check off students that are in the room so that teachers need not manually do so.

For instance, Rainbow enabled the State Islamic University of Antasari Banajarmasin in Indonesia to carry out hybrid education during the pandemic. Beyond virtual conferencing tools for teachers to conduct lessons virtually, the platform also comprised collaboration platforms that allowed staff to easily communicate during remote work. Furthermore, the platform supports the integration of third-party learning applications, allowing students to access all the learning materials they require in one central location.

Technology in the background

The shift is already happening, as can be seen in the rise of voice-activated AI like Siri and Alexa. Instead of having to type a request, users now simply need to speak for technology to respond to their request. Likewise, the advent of Internet of Things (IoT) devices is another way technology is fading into the background.

Smart cities today can use sensors to detect if individuals are in a room, and switch off the lights automatically if no one is present. Meanwhile, wearable devices can help healthcare providers keep track of health parameters like blood pressures and heart rates without patients needing to make a trip down to the clinic.

ALE’s Rainbow platform too can connect with IoT devices. For instance, Rainbow can be integrated within IoT platforms in a smart home. Motion-activated sensors can, for example, detect if a lone elderly living at home has fallen down. The Rainbow communication platform can then step in to contact family members and emergency responders if needed.

In Hokkaido, Japan, Rainbow is integrated within internet-enabled phone sets that are placed in the houses of elderly residents across the island. The elderly can then use these Rainbow-powered phonesets to easily order food, have telehealth consultations, or book ride-hailing services without leaving their homes. This is especially crucial for Hokkaido, where the population is relatively remote and winters are extremely cold.

“All these things happen automatically, without the need of a person sitting there and checking if something is going wrong,” Dumortier adds. “We are there, in the backend, connecting the dots and making sure that people can communicate with each other to help solve the problem.”

Another building block required for Society 5.0 is trust in the technology services that are available. Without this, users will always hesitate to use the technology.

Take SMS notifications, for instance. When Singapore rolled out its vaccination drive, the Ministry of Health would use SMS notifications to inform citizens that they are eligible for a vaccination appointment. But scammers soon took advantage of that and started sending spam messages that mimicked these notifications in a phishing attempt, reported The Straits Times.

When such incidents occur, users are left with doubts about whether to engage with the technology at hand, Dumortier says. He emphasises that tech providers and governments alike have a responsibility to secure these technologies to alleviate such concerns.

For ALE, security begins at the network level, where any individual who tries to connect to the network will first go through an authentication process before their account is activated. Next, when users are using the Rainbow platform, all data they transmit can only be accessed by the user themselves and the person they are sending it to. There are no middle men in the process who can access the data, Dumortier says.

Governments too can play a role in building this trust. The Singapore government, for instance, does so with national digital identity applications like SingPass, which can authenticate the identity of users on digital platforms. This creates a setup where every step from access of data to identity verification is trusted and double checked, Dumortier says.

It is only when the industry and the government are working together that society can truly progress into Society 5.0 – where technology exists to help humans and augment the human connection rather than replace them.