Citizens can now find the number of suspected and confirmed cases in their vicinity using GPS or postal codes. 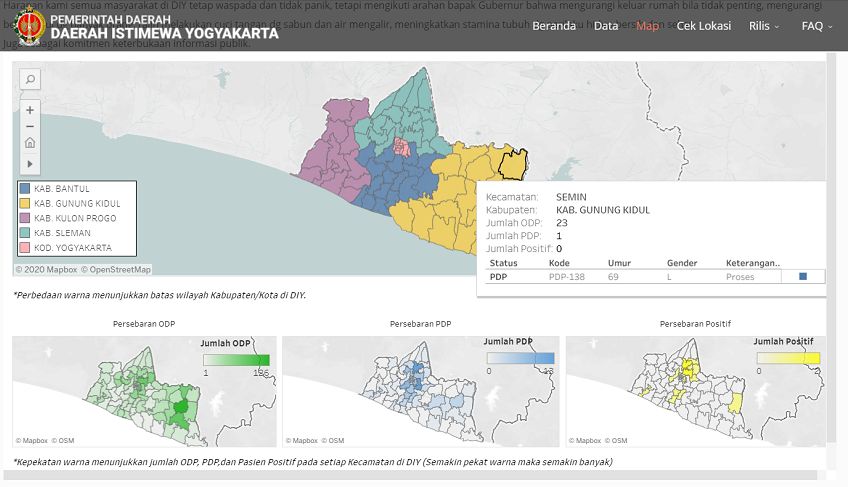 Most of us are not epidemiologists. How can government communicate with people with limited education, scientific knowledge, or time to digest the news?

“A lot of governments are publishing their data with nice graphs and charts, but not many people understand what they mean,” says Krisostomus Nova Rahmanto, CEO of a data science academy in Yogyakarta. Citizens in Yogyakarta have been struggling to get a grasp of the extent of the Covid-19 outbreak, he says.

Krisostomus has teamed up with nine other volunteers to ensure that people with even zero data literacy skills can get critical information on the outbreak. It uses GPS and postal codes to show a map of hotspots nearby, helping people get a grasp of the outbreak in their locality. GovInsider spoke to Krisostomus to find out how his team developed the open source tool.


The Indonesian government shares the number of cases in the country through a national dashboard, but this isn’t the most helpful for citizens. They don’t know how many positive Covid cases there are in their province, and “dashboards with a lot of numbers and charts are confusing for ordinary people”, Krisostomus says.

The tool in Yogyakarta uses a citizen’s location to inform them of the number of Covid-19 cases near them. It shows three key pieces of data: how many have tested positive; how many people are at risk; and how many have displayed symptoms.

It uses the device’s GPS to look at the number of cases in a 3km, 5km and 7km radius from their current location. “Some old phones have very bad GPS”, so there’s the option to search with a postal code. This data is updated every day.

Krisostomus’s team has deliberately made the tool easy to use, particularly for the elderly. “Yogyakarta has the highest population of senior citizens in Indonesia,” he notes. “We use GPS and postal codes. This is very simple information that citizens can know with basic knowledge.”


The website pulls numbers directly from local health offices to ensure it has the most reliable and updated information. Indonesia’s Ministry of Health mandates that all hospitals have to collect information on high-risk, suspected and confirmed cases. This information is grouped according to districts within each city and submitted to local health offices.

How does the website match a user’s location with the number of nearby cases? It uses an algorithm similar to those used by Uber and Grab to measure the distance between a rider and a driver. Krisostomus’s team has adapted the formula to map a set of GPS coordinates, or a postal code, to a database of district coordinates within Yogyakarta.


The team has made the website open source, so other software developers in Indonesia are free to adapt this tool for their own province. Central Java has already built a similar location-based data sharing website. Papua has also expressed interest in developing the tool, revealed Krisostomus’s team. His team is currently working with the national government to scale this tool, and it will be available across the country from next week.

Public panic makes dealing with a pandemic even harder, but in Indonesia, fake news is a “national issue”, says Krisostomus. The team believes this website will help citizens understand the situation, “so citizens won’t panic because they don’t know the truth”. “It is the data openness about Covid-19 that we want to share to citizens in Yogyakarta,” he adds.